When I’m not being all political and ranty, I play videogames quite a bit. I may have mentioned it before. 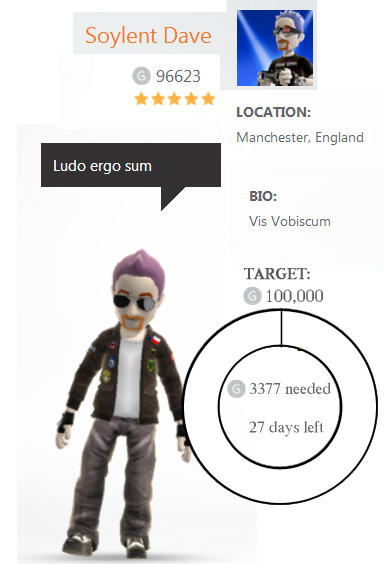 On the 21st May, Microsoft are going to announce their new console. Yes, they’ve announced that there’s going to be an announcement. That’s how these things work.

This isn’t news anyway, we’ve known about it for ages.

My gamerscore is just under 100,000. If you don’t know what that is, well then you’re probably grown-up than I am – it’s my ‘high score’ built up for playing all of my xbox 360 games; you get gamerscore for unlocking achievements. They’re worth varying amounts of gamerscore, and can be trivial or nightmarishly hard to unlock.

Ultimately, it’s an entirely meaningless number – it really just measures how many games you’ve played, and how much time you’ve spent playing them (a bit like the old high score table in Arcades, basically).

But I want to break 100,000 before the new xbox console is announced. Why? Because it would be wrong not to.

Earning 3377 gamerscore in 27 days isn’t particularly straightforward (it’s the equivalent of getting every achievement – fully completing and doing any and all challenges – in three-and-a-third full games, which is fairly time-consuming). I mean, it’s not exactly ‘Labours of Hercules’ territory here, but it’s not ‘getting licked to death by kittens’ either.

I also have some additional rules for myself:

That means ‘unlocking achievements the way they were intended’, not finding loopholes or snidey ways to unlock them quickly or more easily.

That’s ‘me, playing the game directly’. If I’m not good enough to do it myself, I don’t get the achievement. No looking up ‘Secret’ achievements (which would normally spoil the story anyway). No sitting there with a guide and following step-by-step instructions, either.

There are a few games on the xbox which are notable for being incredibly quick and easy for achievement unlocks, games people buy solely for the purpose of inflating their gamerscore. Contrary to what you may be thinking at this point (after I’ve laid out rules and everything…) I’m not taking this seriously; I’m not going to piss around inflating a meaningless number just to watch it grow;  I want it to be a measure of something.

But still, this is meaningless stuff about a meaningless number. So I’d like to take this opportunity to inject some meaning.

If I hit my target, I’ll donate £100 to Cancer Research UK. Hopefully some of you reading will do the same – you can consider sponsoring me, encouraging me in my delusion or just giving money to a really very important charity.

If I don’t hit my target by the appropriate date, I’ll still donate £100 to Cancer Research UK. But I’ll also shave my head and post pictures of the ‘looking like a knob’ results online.

Not that this will happen, because I’ll be hitting my target.

Donate via JustGiving here; 100% of ALL donations goes directly to Cancer Research UK.

6 thoughts on “Dave versus Microsoft”