Despite being a notorious fantasist, rape apologist and occasional InfoWars guest, Craig Murray has a surprising amount of cachet amongst a segment of the left.

So I shouldn’t be surprised that his latest article “Can Anybody Find Any Significant Difference Between May’s Policies and the British National Party Manifesto of 2005?” is gaining traction on social media, and being shared by lots of people who should frankly know better. 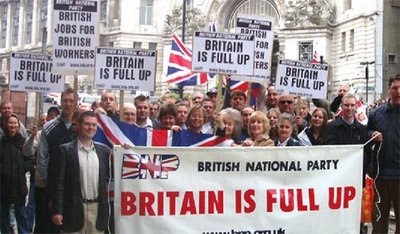 It’s a vile piece of literature. The BNP aren’t comparable to any other UK Political Party – except their inheritors (Britain First), and their predecessors (the National Front and the British Union of Fascists). They’re a white supremacist party.

Some excerpts from the BNP 2005 manifesto:

” We would repeal the Race Relations Acts and all other restrictions on free speech in Britain.”

“We would abolish all politically-correct indoctrination of the police, teachers, and other public employees.”

“We would abolish all laws against racial discrimination in employment and the government bodies associated with enforcing them.”

“A Clause 28-style proscription against the promotion of racial integration in schools and the media would be introduced.”

“all law-abiding adults who have successfully completed their period of military service are required to keep in a safe locker in their homes a standard-issue military assault rifle and ammunition.”

“the first company of British troops to be withdrawn from Iraq on the day a BNP government assumes office would be redeployed to secure the Channel Tunnel and Kent ports against illegal immigration.”

“these refugees are simply not Britain’s responsibility and have no right to refuge here.”

“To ensure that we do not become a minority in our own homeland, and that the native British peoples of our islands retain their culture and identity, we call for an immediate halt to all further immigration, the immediate deportation of all bogus asylum seekers, all criminal entrants and illegal immigrants, and the introduction of a system of voluntary resettlement whereby those immigrants and their descendants who are legally here are afforded the opportunity to return to their lands of ethnic origin” via “A massively-funded and permanent programme”

“We support the re-introduction of corporal punishment for petty criminals and vandals, and the restoration of capital punishment”

“all future British doctors and nurses – except for rare experts required to teach new skills and techniques – are recruited and trained within Britain. ”

… then we hit their economic stuff which is completely batshit.

The Tories are a right wing party. I disagree with them on basically everything.

But the BNP are white supremacists. The legislation they proposed in their 2005 manifesto wasn’t just ‘right wing’; it was openly racist.

There’s a MASSIVE difference between a party like the BNP and the Conservative Party.

One thought on “No, the Tories are not the BNP”